(5) Rembrandtplein, (6) the Jewish Quarter (“Jodenbuurt”), and (7) Plantage: Mostly residential areas with restaurants and bars and a few of the more tame attractions like the Rembrandt House Museum, Botanical Gardens, Jewish Historical Museum, and Artis Zoo & Aquarium.

(9) Vondelpark: Like the Central Park of Amsterdam. Where the one-percenters live. 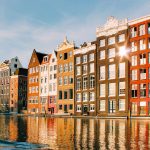 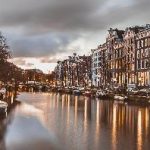 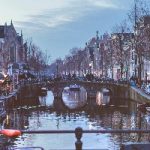 The old, medieval city center is arguably the most convenient neighborhood of central Amsterdam because it is most equidistant to the train station and almost every main attraction. From anywhere near the central train station, you are within walking distance (or an even shorter tram ride) to most major attractions in the city center, including the Rijksmuseum (~30 min), Anne Frank House (~20 minutes), Van Gogh Museum (~35 minutes), and Heineken Brewery (~30 minutes). The Old Center itself is full of shops, restaurants, hostels, and bars, so it’s very active at night. Depending on your preferences, this makes it either super convenient or not quiet enough a place to rest your head at night.

Note that the (1a) Old Side contains the red light district (a/k/a ‘De Wallen’), which gets raucous at night and possibly uncomfortable to walk through. (Even if you’re not partaking, the people watching can be entertaining.) If you stay on the Old Side, ensure that it’s far enough away from the red light district. (Unless that’s what you’re there for. No judgment.) Additionally, although De Wallen is the main red light district, I was surprised to stumble across smaller red light districts in other neighborhoods of central Amsterdam, so double-check whatever area you stay in and accommodate yourself accordingly.

That being said, you’d be well served to research current developments before you go because the area continues to evolve rapidly. The city has increasingly scrutinized De Wallen, ramping up on-the-spot fines for littering, public disorderliness, and public urination, to manage the negative externalities of mass tourism. In 2019, the city will consider a number of proposals to revamp the red light district. Options range from increasing licensing of window workers to shutting down all city center red light districts and relocating them elsewhere.

The New Side (Nieuwe Zijd) is full of accommodations (ranging from budget hostels to the W Amsterdam), bars, restaurants (local and chain), and the main shopping arteries of Niewendijk and, south of Dam Square, Kalverstraat. Although there are lots of chains common to any high street, like Topshop, Zara, McDonald’s and KFC, one of my favorite local brunch/breakfast spots, Gartine, is nestled down a side street behind H&M.

Other notable attractions include: the Royal Palace, Oudekerk (Old Church); “Chinatown” (such as it is, which is rather underwhelming compared to other “Chinatowns” major western cities); Bodyworlds exhibit; Sex Museum; Hash, Marijuana, & Hemp Museum; Madame Tussauds.

The Grachtengordel is the most prototypically Amsterdam-looking part of Amsterdam with its tall step-gabled mansions fronting peaceful canals lined with houseboats, trees, and bicycles.

Although Grachtengordel West, home to many 17th and 18th Century mansions, contrasts with the historically working-class Jordaan, both are now expensive and in-demand areas due to their proximity to the city center. They feature some of the most beautiful canal-lined streets in the center and have more of a (expensive) neighborhood feel. Except for the Anne Frank House, it’s less touristy than other areas. However, due to its historic and picturesque nature, walking tours / boats pass through here frequently.

It’s about a 10-15 minute walk to the bustle of the Damrak, depending on which part of the neighborhood you’re in. However, there are also plenty of local cafes, bars, and restaurants within the neighborhood itself. I haven’t stayed around here myself but have explored it extensively, and it appears to have a good balance between a central location, residential feel, and selection of restaurants, cafes, and bars.

Situated at the intersection of the Old City to the north, Museumplein & Leidseplein to the south, Rembrandtplein to the east, and Grachtengordel West/the Jordaan to the west, this is arguably the center of the center and a very convenient base for exploring. The section of Herengracht passing through the upper part of Grachtengordel South is known as the “Golden Bend” and boasts some of the city’s most beautiful 17th and 18th Century mansions, where the richest of Amsterdam’s elite once lived. As you approach Leidseplein to the southwest, however, it becomes more commercial than Grachtengordel West and the Jordaan. The presence of touristy bars and restaurants gives it a more plastic vibe that may or may not appeal.

Rembrandtplein is a sub-neighborhood within Grachtengordel Zuid and is obviously named after Rembrandt, who lived nearby at Jodenbreestraat 4 from 1639-1656, which is now the Rembrandt House Museum. As you might infer from the name of Rembrandt’s former street (which means “Jewish Wide Street”), this area runs into the historic Jewish Quarter, where you’ll find two historic synagogues, the Jewish Historical Museum, and the National Opera and Ballet.

Continuing counter-clockwise around the old city is Plantage. Other than the Plantage’s Botanical Gardens and Zoo/Aquarium (a/k/a Artis), this area is predominantly residential. Considering all the other things to do in the city, neither attraction is too popular, so Plantage has a tranquil vibe where you’ll find more locals on bicycles than stag do lads on weed.

I stayed in the Rembrandtplein area at an AirBnb and really enjoyed the feeling of staying in a neighborhood with locals. (Actually, I’m still in touch with the hostess, so if you want to check out her place, I can put you in touch with her, and she can direct you to her listing.)

Just outside the Grachtengordel to the southwest is Leidseplein. The square’s name comes from its historic location at the end of the road from Leiden. It was basically a big parking lot for merchant to load and unload their wares from horse-drawn wagons. Today, Leidseplein is one of the busiest spots for nightlife, dominated by the neo-Renaissance Stadsschouwburg (city theater). If you’re into art and antiques, check out the Spiegelkwartier, which is southeast of Leidseplein between Grachtengordel South and the Rijksmuseum, around Spiegelgracht.

The Museumplein and Vondelpark are arguably the most upscale neighborhoods of central Amsterdam (outside the mansions of the historic canals). If you want to be close to the culture, Museumplein puts you a stone’s throw from four major museums: the Rijksmuseum, Van Gogh Museum, Stedelijk (modern art), and MOCO (modern and contemporary art. Think anything from Warhol to Banksy). There are no canals in this area, but it’s walking distance to the greenery of Vondelpark and a short tram ride to the Grachtengordel and center. The neighborhood around Vondelpark, particularly to the north east, is upmarket like those bordering New York’s Central Park.

The “Pipe,” where the streets (mostly) have names of Dutch painters, was originally a cheap and fast city expansion project for the working class to ease the overpopulated Jordaan. Today, it’s widely regarded as the most fire, bohemian neighborhood of central Amsterdam.

On the northern edge of Oude Pijp (Old Pipe), just east of the Rijksmuseum, is the Heineken Brewery. Sure, there are lots of better Dutch beers, but a tour of the Heineken brewery in Amsterdam is what the Guinness experience is to Dublin: Quintessential.

Among the hipstery cafes, ethnic restaurants and grocers, bars, and quirky shops, is Albert Cuyp Market, the most popular and famous street market in Amsterdam. South of the market is Sarphatipark, one of the prettiest parks in the city (after Vondelpark). (For art history geeks, Piet Mondrian lived in this area and started what would become the De Stijl movement in the attic of Ruysdaelkade 75.) This would be a good area to hunt for unique fashion, souvenirs, and gifts.

If you’re tired of pancakes, head to Brouwerij Troost for one of the best burgers in town and an extensive selection of craft beer on tap. (They have two other locations in Amsterdam in Oud-West, north of Vondelpark, and Westergas, northwest of the Jordaan in Westerpark.)

Beyond the Neighborhoods of Central Amsterdam

Further afield are Amsterdam Noord (north) and the Eastern Docklands / Maritime Quarter, which are more recently developed, and I don’t know anything about them except that I went to the Maritime Museum in the east. For your first (or even second) time in Amsterdam, I wouldn’t recommend staying in either of these areas as they’re too far from the main attractions and activities.

If you missed the first part in this series about where to stay in Amsterdam, check out my overview of central Amsterdam here.

This entry was posted in Europe