Budget Galapagos, you ask? Qualified by the fact that it’s still the Galápagos Islands, one of the most remote and untouched places on earth, yes, it’s possible to visit on a “budget,” relative to the alternatives of nature cruises and liveaboards. When combined with staying in hostels and a number of free attractions, Galapagos land-based day trips are the most affordable and flexible option for exploring the archipelago because you can pick and choose each travel component to suit your budget and interests.

Where to Start Your Galapagos Land-Based Day Trips:

There are two airports serving the Galápagos from mainland Ecuador: One each on Isla Baltra (just north of Santa Cruz) and San Cristóbal, which means that you will start nearest either Puerto Ayora or Puerto Baquerizo Moreno (“PBM”), respectively. You should stay at least one night in PBM to take a day trip to Kicker Rock, which has excellent snorkeling (and possible hammerheads). Then, if you’re limited by time/money, I would spend most of your time in Puerto Ayora because it is: (1) the largest city, which means it has the most accommodation options and therefore the broadest range of prices; and (2) the most centrally located of the land-based options, which means that from here it’s possible to take day trips to the most other points of interest (including Floreana, Bartolomé, Seymour Norte, Santa Fé, and Plazas). Finally, if you have the time/money or prefer a less developed island, go to Puerto Villamil on Isabela.

Where to Base Yourself:

There are only four main islands in the Galápagos with a significant human population (from most to least inhabited): Isla Santa Cruz (~12,000 people), Isla de San Cristóbal (~6000), Isla Isabela (~2000), and Floreana (~100). I mention population stats because the more people there are, the more hotel and restaurant options there are, which means the more budget options there are. The main cities on these islands are, respectively, Puerto Ayora, PBM, Puerto Villamil, and Puerto Velasco Ibarra (“PVI”). For example, in Puerto Ayora I found super basic hostel beds for as low as $10-15 per night (for example, one bed in a 4-6 bed dorm with a fan, no kitchen, and a cold shower). 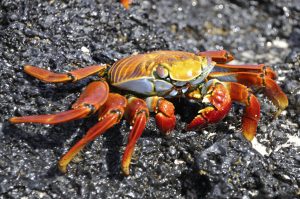 An itinerary that involves the least backtracking would fly into one airport and out of the other. For example, fly into San Cristobal, where snorkeling Kicker Rock is the absolute “must do” attraction, and a visit to the Interpretation Center will give you a good foundation of knowledge to help you better appreciate the rest of your trip. Then go to Puerto Ayora on Santa Cruz, where you can take day trips inland to see the giant land tortoises and visit the islands of Bartolome, North Seymour, and Floreana. Then go to Puerto Villamil on Isabela to hike a volcano and see more giant land tortoises before returning to Puerto Ayora to transfer north across the island and take the ferry and short bus ride to the airport on Baltra.

Seymour Norte: The increased foot-traffic from the popularity of this site has led to the national park increasing prices to control tourist impact on this small island off the north coast of Baltra. Highlights include large colonies of blue-footed boobies and frigate birds, sea lions, and the ubiquitous marine iguanas and Sally Lightfoot crabs. These day trips will often also stop at Las Bachas beach, named for the wrecked U.S. military barges that washed up here after being scuttled when the U.S. transferred control of its military base on Baltra to Ecuador. (The name “Bachas” is not Spanish but rather based on the sound of how locals pronounced “barges.”)  Depending on the season, the beach has some sea turtle nests, and nearby is a lagoon that may or may not have flamingos in it.

Bartholomé is where you’ll find Pinnacle Rock, one of the most photographed places in the Galápagos. As one of the iconic views in the islands, this site has also seen increased tourism that has, in turn, led to increased prices in an attempt to lower demand.

You can go to all of these attractions to explore on your own and don’t need to be accompanied by a certified guide.

Fausto Llerena Tortoise Center: Not to be confused with the nearby Charles Darwin Research Station, this is where Lonesome George, last known member of his species (probably) who died in 2012, used to live and is still where you see the tortoises of the captive breeding program in all stages of life from incubation to hatchlings (like, totes adorbs!) to adulthood. The center is named for Fausto Llerena Sánchez (or “Don Fausto”), who was Lonesome George’s primary caretaker for 40 years and Ecuador’s oldest park ranger at the time of his retirement.

Tortuga Bay (free; snorkeling, kayaking, mangroves, marine iguanas): It takes about 20 minutes to walk to the trailhead from the dock where you’ll arrive and 45 to 60 min from the trailhead to the beach (about 2.5 km), so leave early enough to make it back before it closes at 18:00. The first beach you get to has really strong waves so you shouldn’t really swim there (though you can surf there and wade out up to your chest or so). To get to the calm part of the bay (for snorkeling, especially if you bring your own gear), take a right at the beach and walk another 15 minutes or so to get to a smaller beach with some mangroves for shade and rentable kayaks. Bring lots of sun protection and water as the walk to the bay and along the beach is completely exposed.

Las Grietas (free; swimming/snorkeling in a cold water gorge with high cliffs on either side): From the docks in Puerto Ayora, take a 1-minute water taxi ride for $0.60 to Punta Estrada. Then walk 20 minutes to Las Grietas. Because they limit the number of people who can enter at one time, you’re allowed to stay only for one hour. It also closes at 18:00. The busiest time is at the weekend. Bring a towel and some snorkel gear (which you can rent for the day in Puerto Ayora).

El Chato ($3 entry + $35 round-trip taxi; giant land tortoises “in the wild”): El Chato is “wild” in the sense that the turtles are not in zoo-type enclosures like at the Fausto Llerena Tortoise Center. It’s not so wild in the sense that the tortoises wander around privately owned property, a former farm converted into a tourist attraction because it’s more lucrative than farming. I also visited another “tortoise farm” on Santa Cruz Island called El Manzanillo, but I preferred El Chato because it has a lagoon and a small lava tube / cave that make the landscape slightly more interesting. Other than that, the experience is essentially the same.

El Garrapatero Beach (~$35 for round-trip taxi; probably skip it): About 20 km from Puerto Ayora, it cost $35 in a taxi round trip from Puerto Ayora. It’s a pretty beach with a lagoon nearby that may or may not have flamingos (none when I was there). It’s less crowded than Tortuga Bay because it’s more out of the way and has similar mangrove growths on the beach. A grove of manzanillo trees creates a natural canopy where there are BBQ pits and a nice shaded area to get out of the sun. It was a pleasant enough half day trip, but overall not worth the expense unless you’ve already experienced most other things in Galápagos.

Los Gemelos (free + cost of transport): 100-foot deep craters formed by collapsed lava caverns. If you go to El Chato (or somewhere else inland), bargain with your driver to stop here along the way, so you don’t have to make separate trips.

RESTAURANTS: Like everything in the Galápagos, eating out is more expensive than on the mainland.

Isla Grill had the best seafood and quality of food overall in Puerto Ayora but is also the most expensive. If you have two or more people in your party, get the signature asado dish (the eponymous “Isla Grill” platter). It’s enough to feed 3-4 people for $30 total, including veggies and an excellent assortment of grilled meat and seafood. If you splurge on any dish, this should be it.

Il Giardino is not as expensive as Isla Grill (but is also not quite as good). Some decent salads, batidos, and burger.

Galápagos Deli is a good balance of price and quality and has the best single-serving pizzas in Puerto Ayora.

The top attraction, as mentioned above, is to snorkel / dive Kicker Rock. The other main attraction is Interpretation Center, which has a good museum (free) with comprehensive exhibits on the natural and human history of Galápagos, including contemporary ecological challenges. Behind the center is a short walk to the Tirejetas viewpoint and a statue of Charles Darwin overlooking the bay where he is believed to have disembarked the Beagle.

As one of the youngest islands, Isabela has dramatic volcanic landscapes and, being less frequented than the central and southern islands, is perhaps the closest thing you can get to “off the beaten path” in a national park as regulated the Galápagos. Near Puerto Villamil are several notable attractions: seeing flamingos during mating season in the Devil’s Pool (west of town), The Tortoise Breeding Center (if you plan to go here, skip the one in Puerto Ayora, which is smaller), snorkeling with reef sharks (and possibly penguins) in Las Tintoreras, the option of two hikes up to the steaming volcanic rim of Sierra Negra. For history buffs, the Wall of Tears is about 20 minutes west of town by taxi and was built by prisoners for no purpose other than punishment in the 1940s. If you’re up for a hike, it is 14-km round-trip, with swimming opportunities along the coast on the way.

Isabela’s marine sites of Elizabeth Bay, Punta Moreno, Tagus Cove, and Urbina Bay are restricted to nature cruises only and are not accessible by land-based travelers.

This entry was posted in Uncategorized