Part I: Where to Stay In Amsterdam

Where should I stay in Amsterdam? A perennial question for travelers depending on your current style of travel and what you’re looking for. Read on to get an overview of the ten neighborhoods of central Amsterdam and its layout.

Central Amsterdam roughly divides into ten neighborhoods described below. All of these areas constitute the “Centrum,” so regardless of where you stay, you can easily get around by public transportation and walking. It’s more a question of what you want to be closest to and the feel of the neighborhood you want to come home to. For more in-depth descriptions of each neighborhood, check out Part II, so you can find the best fit for your trip. 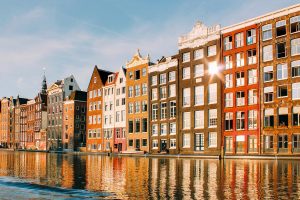 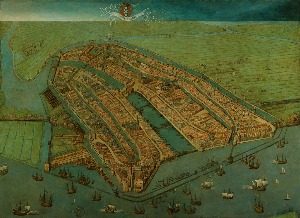 From the main train station where you arrive, Amsterdam ripples out in a series of concentric crescent-shaped canals that are transected, like the spokes on a wheel, by major thoroughfares. The Centraal Station opens south on to the central axis of the Damrak, which is the main street leading from the station to Dam Square and the Royal Palace. 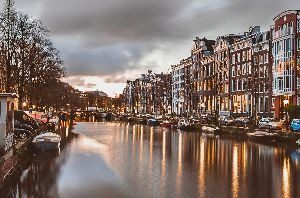 Outside the Grachtengordel to the west is (3) the Jordaan (residential; super gentrified former working class area). Continuing counter-clockwise around the Old Center is (2b) Grachtengordel South (“Golden Curve”; more commercial).

Around to the south/southeast are (4) Rembrandtplein, (5) the Jewish Quarter (“Jodenbuurt”), and (6) Plantage (all three are mostly residential). The location of the Jewish Quarter and Plantage means they really should be called Grachtengordel East, but they seem to have gotten tired of the “Grachtengordel” naming system after the first two. So much for orderly naming conventions. 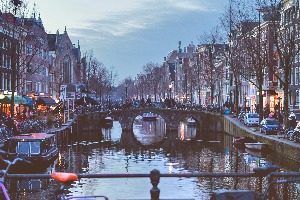 Moving outside the Grachtengordel to the south/southwest is the (7) Leidseplein (nightlife), (8) Museumplein (museums, duh) and (9) Vondelpark (an expensive area around the park), which is a long rectangular park that stretches even further southwest. Continuing counterclockwise, east of the Museumplein and south of the Grachtengordel is (10) De Pijp (hipsterland).

Regardless of where you stay, the organization of the Amsterdam’s center into zones makes it easy to explore, as you can focus on one or two areas each day. (Trivia: Manhattan, a/k/a New Amsterdam, has a similar, grid-oriented layout, which was necessitated by the design of the canals during land reclamation.) For more details about what area you might want to stay in Amsterdam, check out Part II: Neighborhoods of Central Amsterdam.

This entry was posted in Uncategorized